The Länsimetro project is currently building the second phase of the metro from Matinkylä to Kivenlahti. The project includes five stations and it is estimated to be ready for handover in 2023. The first phase was finished in 2017. To strengthen project management, improve the internal communication flow and speed-up decision making Länsimetro introduced Hailer in autumn 2018 as a common communication platform. Länsimetro named the new communication tool as the Meeting Point.

Länsimetro and Hailer introduced the new platform in two steps. Also, the management was committed to supporting the project. The new platform is a major change because it makes communication more collective. The communication is now concentrating on one channel Hailer, instead of multiple ones.

The idea for the new communication model came from both Länsimetro and Hailer. Länsimetro had already initiated a change management plan for the internal communication upgrade project. They had earlier pilot cases with other instant message platforms. These did not respond to the needs. The organization and project complexity set challenges for any tool.

Hailer was the only solution, that could include a static database and a dynamic communication platform. It enabled promotion and tracking of ongoing issues and responded to the challenges in communication and information sharing

Länsimetro and Hailer accomplished successful change by combining experimental culture and the famous leadership commitment. Equally important was that the initiative for this change was coming from the operational and from management levels of the organization. The whole organization was involved in designing and piloting new practices. The management did not dictate the outcome but involved everyone to ensure a successful change. The focus was to concentrate all messages related to internal communication to one channel, instead of e-mail, internal website and an instant message application.

Hailer showed its best in the change project

Small as well as big changes to processes, data models or communication solutions are easy to implement in one workshop. The pilot group instantly gave user feedback and tested a diverse set of operation models.  As a result of a larger pilot, it was simplified according to user experience and feedback. The configuration of Hailer is simple and in the end, the pilot group was happy.

Consequently, the team repeated the success experience when they launched the new communication model. The whole organization accepted the new best practices.

Teams started to initiate new improvement ideas and gather suggestions. These ideas were basically the same steps that the core group had planned in the workshop. On the first days of the implementation, the project team arranged tutorials and clinics available for the end-users. They also had a possibility to discuss and ask advice from the admins. And immediately take suggestions forward to configure the platform further. After several rounds of user feedback and modifications, the end result was better than the pilot. 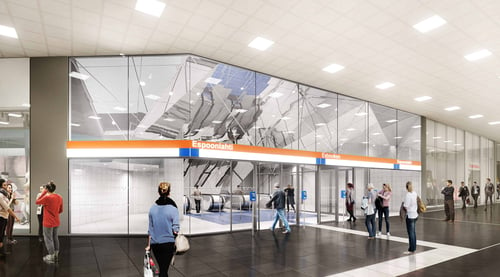 Länsimetro is using Hailer as a core solution for communication and information sharing for the project team. The solution continues to evolve, responding to the challenges of the entire project and the smaller teams.