Where it all started - How Hailer was born

This is a story of how we stumbled on a problem that we slowly fell in love with and eventually gave us a big dream.

In April 2010, I had cleared my calendar for a day to work on long-term things. I had planned to give that day to myself as I was living a stressful time. My father had passed away two years before, and I was now at 20 something years, the main shareholder, a board member, and part of the management in a company I knew very little of. Before my father's sudden passing, the company had gone through a major leveraged expansion phase.

There I was sitting with an empty whiteboard, 25 subsidiaries and joint ventures in various countries that we had managed to salvage in the aftermath of the 2008 financial crisis.

I started by grabbing my first of 7 cups of coffee that we do in Finland, but no big revelations came to me. I tried building models, writing strategies, and all sorts, but no flow whatsoever.

I was probably on a two-hour streak when I got stuck and decided just to do a quick sneak peek at my emails. 83 new unread after removing spam. A typical dopamine-depressive rollercoaster experience of the 21st century. There was no chance I could get to the bottom of the mail hell as I was enjoying my personal time. Still, as I had my email open, I decided to run a simple experiment by moving all emails from my inbox to a folder named by the year they had been received. 1 324, 2 402, 5 630, 9 540, 16 456.

I was not surprised by the outcome.  What got me a bit worried was how this almost exponential curve would continue to develop. The rest of the day went by without any further revelations, so I felt like I returned home empty-handed. The only thing I had made was a primitive filing system for old emails. The primary thought on my mind was the old saying that.

“if your business depends on you, you don't have a business; you have a job.”

Fast forward only a couple of days, and we have a late-night call from the Louisiana branch of BP. 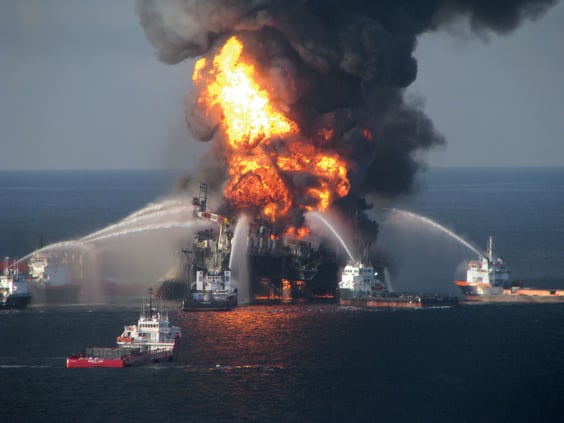 “ This will be all over the news in less than 24 hours. We have an uncontrolled subsea blowout in the Gulf Of Mexico that is gushing out oil. How many experts and how much oil spill gear can you get here in how little time?”

The Deepwater Horizon oil spill had occurred. While this is a story in itself, there are two key things to take away from this. The first was that miracles can be achieved when people get together and collaborate. The second is that a clear mission can be executed.

I recall that we had more than 4000 people, 450 shrimping vessels that had been retrofitted for Oil spill work, and 12 aircraft operating under our command at the peak weeks. None of the business software we had purchased was flexible enough to be used to run the operation.

We organized a get-together for the global core team in the aftermath of the oil spill. A part of the exercise included a workshop where we debriefed what worked and what didn't. One thing kept coming up in almost all contexts:

“Information flow was far from perfect as the signal many times got lost in all the noise.”

I can't remember all the consultants who were hired. All the system development projects that were started as a consequence of this. And I really don't want to know the costs related to it.

I wasn't that involved as I couldn't care less about IT. I had not used a PC for ten years, and I was not planning to sacrifice my freedom now. As long as I got the stuff I needed on my iPhone 3G or whatever the model was at the time, I was happy.

There was a little side hustle, though, and it included 3x 55-inch flat-screen monitors that we bolted right at the entrance to the office. After the monitors were on the wall, we asked ourselves what we could put on them to help improve information flow? Who knows anything about how to get things up there that looks even half decent?

The guy from the IT dept.

One guy from the IT department raised his hand and said he could help out under the condition that he can work at night and come into the office when he woke up. After a 5 minute meeting we had a deal and what we thought was a plan and off he went.

The next morning, a set of computers ran different software showed a world map on one of the screens with all sorts of strategic locations and vessels, photos looping in the

second, and some kind of a dashboard on the third. Project LAM_TV was officially born.

What followed was a crazy spree of new features for the screens and a bunch of legendary stories for the people who visited the office and saw the screens. The wildest legends were created around all the black magic behind the scenes.

The next chapter of the story lies in this black magic as we were slowly creating a cloud system that allowed for people to interact with the screens. We didn't really prioritize or categorize the different departments we served to feed information on the screens. Instead, we just tried to create as valuable, engaging, and interesting insights as possible.

Fun fact: Our first server was hosted in France, and paid 360 ⁇  / year to run it. We were proud that the level of encryption we used on the server's database was illegal in France. We were happily breaking it. Why should a French official have the right to check out data?

In the beginning, our driver was to get information on the screen that had a big impact or the best wow effect. Gradually, our simple app for controlling the screens had a ton of mission-critical data. We had served every department from sales, marketing, project managers, HR to finance people at this stage.

Each of these teams had their dedicated systems that we knew very little about, yet they came with requests for all sorts of things. At some point, we realized that we just had too many small micro features and that we had to reassess what we wanted to do going forward.

We loved our Lam_tv screens, but we loved the generic communication problem that we had been working with more. This is why we decided to kill the Lam_tv screens and focus on figuring out why the CRM wasn't doing it for the sales team, the ERP for the project managers, the PLM for the product people, and the HRM for the HR team.

Most of all we wanted to know why the email inbox curve kept on growing exponentially. In order to find this out, we began talking to all the different departments instead of making features on request, we made a strategy to focus on generic features that everyone can benefit from.

It turned out everyone was trying to run a process, and people spent a great share of their time communicating and messaging with one another, to keep everyone in the loop. This led us to our 3 cornerstones that are still at the core of our product.

As we got to this stage we realized that the vision is massive and it will require a long-term commitment.

We needed a name. 3 coincidences lead to the fact that we picked Hailer

Since we registered Hailer.com, we have worked with customers in various fields to solve their problems. We have used the same generic, modular, and minimalistic philosophy when approaching all problems.

On occasions, we have created some new strange features, but we have strived to remove everything unnecessary with time. Hence, we have as few as possible-yet robust building blocks at the core of our product that different customers can use to solve their individual problems.

Unfortunately, the world does not work like this as most problems are solved by adding a new layer of complexity rather than the other way around. This is why we believe that we are in a situation where the world is extremely polarized and trust in our institutions has never been lower.

Central planning is already trying to make its way back with ESG metrics and agendas presented by the World Economic Forum among other organizations. Is this the way to do it?

We believe that linked data on a distributed infrastructure can give people enough transparency so the free market will flourish without interference from a centralized global elite. The single most important reason for human prosperity is our ability to cooperate. We want to do our part by making sure that we can do this also in the future.

Our big dream is to offer the world a new intuitive way to cooperate and communicate, a way that comes with inbuilt trust without even having to trust us as a central party. A world where people would never even consider sending one another an excel spreadsheet as an email.